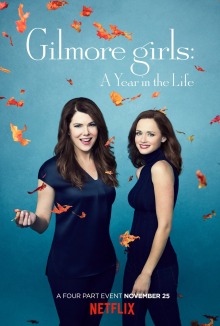 A Year in the Life

At odds with the most important people in her life, Lorelai seeks wisdom in nature. Rory goes out for a wild night with an unexpected crowd.

I think this one is probably my favorite out of all four episodes, and there are a couple of reasons why. First, there is the evolution of Emily. As I said in yesterday’s post, watching her change into this independent person who is going to enjoy the life given to her makes me want to write a story about a character like that. I love how she blossoms in this episode, and I think Richard would have loved to see it too. And the moment of Lorelai telling her that story about Richard . . .

I have to say even with that story, I don’t really know if I understand the whole “going wild” thing Lorelai does. I mean, I know that the book and movie were big when this revival came out, but seeing as how Lorelai doesn’t like nature or camping or anything active, it’s just not something that fits her character. Which again, hello writers, why are you changing everyone? It’s just another reason why true fans of the show are shaking our heads thinking you have not done this revival service with what you wrote.

Moving on. I did love seeing Colin, Finn, and Robert, and it’s not surprising to see that even years later they are still utter morons (I mean that in the nicest way).

I know there are parallels being made with Rory/Logan/Jess being like Lorelai/Christopher/Luke. I do see it. Although, I think Rory and Logan would make it if they were together, whereas Lorelai and Christopher never would. Honestly, I’d be fine with her ending up with either one.

There is one part that confuses me though. Why does Rory think that she can just up and move to Queens because she has a book idea? She has no money and, yeah, sure, you can have a book idea, but that doesn’t mean you’re going to sell it for hundreds of thousands of dollars or you’re going to be rich. I suppose this comment should have been on the Summer episode, but it’s been bugging me. Book ideas don’t equal livable wage. Especially just one book.

Again, moving on . . . It finally happened. Lorelai and Luke made it to the alter. Even if it was a little weird.

Which brings me to the last bit of this post about the last four words. I’m so happy for the writer Amy Sherman-whatever her name is that she got her precious last four words out into the world. However, I believe she did it at the expense of the fans which I think is beyond selfish. To drop that bomb and end the show? I wonder how many people have yelled at her in public for what she did.

And I know there is controversy over who the father is. It’s Logan. There is no way it could be Jess since they never did anything and there’s not way it could be the one-night-stand wookie dude because that was MONTHS ago. That was in the spring episode. She would have found out a long time ago. So, no, there isn’t anyone else it could be other than Logan, which also ties into the Rory/Logan/Jess, Lorelai/Christopher/Luke thing.

So what did you think of the last episode?