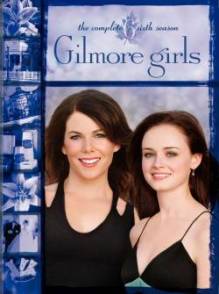 Thanksgiving arrives and, after months of emotional turmoil, all is well on Planet Gilmore. Except for one teeny issue: Luke doesn’t know how to tell Lorelai about his daughter. Lane’s band plays a showcase.

I kind of like this episode for a few reasons. One of which it focuses a lot on Lane’s band and, so, of course, we get more scenes with Sebastian Bach. Yay! He has some one liners in this episode that are hilarious too. You can check the quotes below.

We finally see Christopher again after all this time, but thankfully he comes bearing news. Really good news that gets Rory out of a tight spot with her Grandparents and Yale. I still wonder exactly how much money the guy gets. Hmm . . . I wonder if there is speculation roaming around somewhere on the interwebs . . .

Guess what, there is. Some are saying it was assumed to be about $50 million. *gasp* I didn’t think it was that much. Good grief.

What else can I say about the episode. I didn’t really care for how they downplayed Thanksgiving. As my favorite holiday, I was a bit bummed. I did like how they had dinner and all, but it was kind of ruined with the news that Logan thinks he and Rory broke up instead of are just taking a break and Luke calls his daughter—again without telling Lorelai even though he wants her to tell him everything.*eyeroll.

The band is setting up the equipment, ready for a sound check. Zach is not there yet.]
BRIAN: This is the first club I ever went to. I was underage and snuck in and saw Granddaddy in one of their first concerts.
LANE: Cool.
GIL: I remember once throwing up in that corner, and some dude slipped in and had to go to the hospital, and I stole the chick he was with and shacked up with her for like a week and a half.
LANE: Another fun memory.

RORY: Everyone ready?
LANE: Pretty much, although sound check was a little weird.
RORY: Well, you know what they say. Weird sound check, good gig.
LANE [nodding]: Who says that?
RORY: Well, just me. But I’m hoping it’ll catch on.
LANE: See those two guys? Those are the label guys.
RORY: Oh. I’ll be careful not to hurt them when I start violently slam-dancing. You’re going to be great.

Felt a pain in my leg today while running. Now I can't run. Ugh. It better be better by tomorrow!!
Feeling this hard today as I stare at my screen wishing I could just reach my stupid word count goal for the day so I can be done. I've gone through several moods of wanting to write all the books I have in my "to write files" at once to having zero interest in any of them.
It's been a Monday morning. But at least I got my walk in and get to see pictures like this . . .
Cover Reveal! Set to release on August 2022, The Autumn You Left, is a historical women's fiction with romance set in 1930 and follows the circus!
I tried to tell Andi it was Friday, but she didn't listen and still looks like she has a case of the Mondays.
Apparently, I loved to write before I knew what I was doing. I also loved to wear a Tupperware salad bowl as a hat.
Loading Comments...
%d bloggers like this: