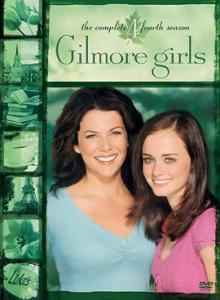 Rory and Paris go south for a rite of passage–spring break! Jason deals with the rite of passage of giving Lorelai his house key. Luke is read his rights after beating up the car that belongs to Nicole’s secret boyfriend.

This is one of my favorite episodes. I love Rory and Paris’s friendship and it definitely shines in this episode. All I can do is hope my daughters get friends like Paris, because as Lorelai says:

And take Paris with you everywhere. Not much can happen with that girl along.

Isn’t that the truth. But I do love her. One thing I hope my daughters never do is go to a strange city, at night, and run around the block like Janet does. That’s a one way ticket to getting attacked. But I know this is a show.

The one that had the most fun was Glen. I actually have always like Glen. He’s this quirky little character that really adds to the scenes he’s in.

The only thing I don’t care for in this episode is the awkward way Jason gives Lorelai a key to his apartment. Like could you be any more of a lame duck? But again, that’s Jason—a lame duck.

Moving on . . . I was never sure why they had that random cute guy in the episode, but then again, it probably wouldn’t have been believable for Rory to go to something like Spring Break and not meet a cute guy. It’s also really funny how Madeline bumps into those twins and spills their drinks. Although the stamp on the hand trick . . . I don’t think that works in real life. Did make me giggle though. Same with the kiss between Paris and Rory. The whole episode kind of does with how Rory and Paris just can’t seem to do Spring Break right. I so hope my daughters have the same kind of Spring Break and not some crazy, wild one.

There is a sad part to this episode though when Luke is in jail and then they go back to get his truck and we still see Nicole’s secret boyfriend’s car. She should have just ended it. To out and out cheat on Luke? I never liked her and I never will.

JANET: Hey, there’s extra room in the van, in case you guys need a ride.
RORY: Oh, no, thank you. I don’t think we’re gonna do the whole spring break thing.
PARIS: Ever since I broke up with Moondoggie, soakin’ up the rays hasn’t been the same.

PARIS: Out of the way.
RORY: Move, move, move!
FEMALE STUDENT: [Walking out of dorm] Is it raining?
PARIS: No, it’s National Baptism Day. Tie your tubes, idiot.

RORY: But it’s spring break.
PARIS: I know.
RORY: It’s “girls gone wild,” and boys doing the twist. We’re not spring-breaky people, are we?
PARIS: I don’t know what we are, but I am so cold right now that the thought of spending a week with a bunch of drunken bimbos and rattle-headed frat boys seems like a very good trade off for being warm.

RORY: You’re not worried, are you? Because I’m just going for the sun and to read, nothing more.
LORELAI: I know, I know. It’s just it’s always the good kids who’ve never had a drink that take one sip of Kahlua and fall out of a window.
RORY: So you’re sad you never taught me how to drink?
LORELAI: Exactly!
RORY: Well grab a bottle and some quarters and let’s go.
LORELAI: No falling out of windows.
RORY: Not even a first floor one.
LORELAI: And don’t drink. And after you’re done not drinking, drink tons of water and take two aspirin before you go to bed.

LORELAI: Good night, Jason. [Goes inside house, check answering machine]
LUKE: [On answering machine] Hey, it’s Luke. I’m sorry to be calling you like this, but I was wondering if, when you get this message, you could come pick me up ’cause I need a ride. I’m in Litchfield, the corner of Mason and Pine. It’s a big, white building. You’ll recognize it by the police sign outside because, oh, hell, I’m in jail. Okay, there I said it. Long story. I’ll tell you when you get here. Thanks… if you come. Oh, one more thing. I need to borrow a little money- 300 bucks. It’s just a loan, and, oh, hell, it’s for my bail. [Yells into background] I’m gettin’ off now! Relax!

I wrote the two best words today!
Life with a teenage girl . . . I'm standing in the church bathroom, finishing off a bag of Cheez-Its (and taking my time) so my oldest can talk to the boy she likes.
The Promises Between Us trilogy: Yours, Mine, and Ours will be complete May 4, 2021! You can grab Yours (Book One) now on Amazon and preorder Mine (Book Two and out March 23rd) and Ours (Book Three and out May 4th) today! And you can read them for FREE with Kindle Unlimited.
There are moments in life when the world kicks you in the butt. Like when your computer crashes and dies a painful death. Then there are moments that just make you cry and you don't know what to do because someone shows so much kindness it takes your breath away. Love you too @mommatank112. And thank you so much. @fathertank112
Releasing February 23, 2021! Book One in The Promises Between Us Family Saga Trilogy! Preorder your copies today!
Awe. She loves me so much!!! *insert sarcasm*
Loading Comments...
Comment
×
%d bloggers like this: