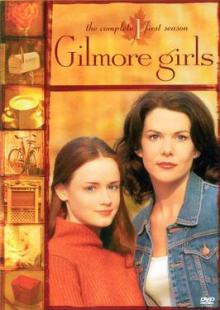 Rory takes up golf to fulfill a school athletic requirement and, to Lorelai’s dismay, grows fond of her grandfather when he takes her to his country club for a day on the links. The inn staff prepares for a double wedding involving identical sets of twins.

This episode exposes a plot hole that although I’ve tried to research why, has never been explained. I suppose we can just chalk it up to writers who had to change mid-season to bring in fresh new characters and content and hoped no one would notice. In the beginning sequence of the show, while the Gilmore’s are having their weekly Friday night dinner, they mentioned Lorelia, the first, Richard’s mother. They speak of the woman as if she is dead, talking about her in the past tense. However, we later learn, in episode 18, she’s actually still alive!

And moving on to my thoughts on this episode . . .

I think this is where we start seeing the relationship between Rory and Richard bloom. Although she has moments of closeness with Emily, Rory and Richard develop a bond throughout the series that is probably the strongest of the four of them together (aside from Lorelai and Rory, of course). I especially love the scene where they are in the separate steam rooms hearing the gossip of the club, then later, Rory tells Richard all about it and he gobbles up every word.

I really like that we are finally getting a glimpse into Emily and Richard’s life too, and it’s starting to feel like they are actual cast members, not these two people they mention from time to time. And, of course, bringing in Sookie and Jackson a bit more over the radishes, blueberries, and strawberries brings loads of entertainment.

I also have to say, I’m really curious as to whether or not the masseuse at the Independence Inn really does look like Antonio Banderas. They never show him! Ugh.

We can also start a list of Emily Gilmore’s maids, since this is the first time we hear about how she can’t keep staff for long (I will update this list as I watch the episodes and get new names):

Emily: So, Lorelai, how are things at that charming little inn of yours?
Lorelai: Mm — they’re still charming and little. We’re just crossing our fingers it doesn’t assert itself and become rude and large.

(to Rory) My God. This day, the swans, the tulle, my head. (to Luke) Luke, I need the largest cheeseburger in the world. Let’s break a record, Mister.

Emily: I think we should consider getting her a membership at the club, don’t you?
Lorelai: If she wants, sure.
Emily: I mean, to have a place to go where she could socialize. That’s very important to a young girl.
Lorelai: Well, now, especially that the crack den has closed down on the corner, all her really good friends are gone. What do you think, Mom, should I pursue the career in comedy?

Looking for more episodes? Check out the Gilmore Girls Project for a complete list!