I have one ad on Facebook that does well. Really well. It’s spreading the word about my latest release, Through the Eyes of a Captive, and it pays for itself, several times over most days. I am really happy with this ad and the results it’s given me.

However, with that said, it’s also an ad that has received a lot of . . . comments.

So what’s wrong with that? Don’t authors want people to comment on their ads and posts?

Yes, we do! We love them. However, these comments . . . well, they aren’t those good comments authors like to get. They aren’t “Oh, I loved this book” or “A must-read” or “I can’t wait to read it.”

Instead, they are, well, honestly, they are odd, and most of them are from people who apparently think that I took out an ad on Facebook to ask a question about history. 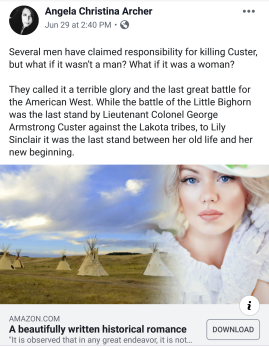 Yeah, I know. I know all of these things. I wasn’t asking like I wanted your answer. I wasn’t asking because I want to know about this moment in history. I can Google the answer for my dang self. In fact, I’ve done it. Do they not see the “A beautifully written historical romance” at the bottom? Do they not see that this is a book? And not a non-fiction historical book, but a fictional romance?

Is imagination really that dead?

Not to mention the question I ask at the beginning of the blurb is a hook. Period.

A hook sentence is a sentence that draws the reader in. Authors have about .3 seconds to attract someone’s attention, so how do we do this? With a hook into the main focus of the story–a FAKE story because that is what I, as an author, do for a living. I make stuff up and use characters and places to create a book and publish it.

Over the last couple of months, I’ve just brushed these comments off. They aren’t worth the time or effort, so it’s a standard, ‘delete’ and move on. However, along with them, there have been a couple of ones that have me completely shaking my head and wondering what is wrong with people.

“What’s with the white fashion model on this ad? Are you claiming that a white contemporary fashion model killed Custer?” ~ one said.

First of all, I’m not “claiming” anything. It’s a book. Do you not know the concept of a book anymore? I mean, what’s with the stupid comment on this ad? Are you so stupid you can’t see it’s for a fictional historical romance? Furthermore, she’s not a contemporary model. If you saw the whole picture and the dress she’s wearing, you would see she is in a timer-period correct dress.

“Trying to rewrite history?” ~ another said.

No, I’m not trying to rewrite history. Again, I have to ask, does this person understand the concept of a fictional book? I know several hundreds of thousands of real people who are actually trying to rewrite history every day, however, that is not a soapbox I wish to step on today. But what is wrong with an author creating a fake story with fake characters? I’m failing to see the need for this woman’s comment. Of course, I also failed to see the point for the other one I mentioned above too.

I think my favorite is the last one I will share with you.

“Bull WTF can these people wake up.” ~ another said.

Uh . . . I don’t think I even know where to go with this one. “Can these people wake up?” Wake up to what? Now, I’m assuming here, because she didn’t leave me much to go on for the reason of her micro-mini rant, but I think she means, that me, as a white woman, shouldn’t be writing a Native American story or that I shouldn’t have a white woman character save the day. ???

So does that mean that Caroline Weldon, a real life white woman who painted Sitting Bull and became a huge activist for Native American’s rights was a “white savior”? Does she or her actions not matter because of the color of her skin? I’m failing to see how I can’t, IN A FICTION NOVEL, have a white character do something good for others WHEN IT FRICKIN’ HAPPENED IN REAL LIFE!!!

I swear, it’s like imagination and common sense have completely flown the coop. I know I shouldn’t be asking this question because it’s foolish to do so, but what is wrong with people? Have we completely lost our sense of what a fictional novel is for? I swear, sometimes I think if I get another comment, my head is seriously going to explode.

I lost my Charlie yesterday. I'm devastated. I miss him so much. We only had 5 years with him and it wasn't enough. . . #lifewithkittens #lifewithcats #cats #catlover #catsofinstagram #kitten #kittensofinstagram #kitty #kittycat #pets #petsofinstagram
I tell them every day "Six feet apart, guys!" But they won't listen. I hope every one stays safe and healthy out there! . . #socialdistancing #stayhome #horses #horseofinstagram #horses🐴 #horse🐴 #palomino #palominohorse #appaloosa #horsesofinstagram #horsemom
Read for FREE in Kindle Unlimited Black Tuesday, October 29, 1929, the day the stock market crashed, and the day Evelyn Ford will never forget. Especially, after she finds herself entangled in the New York mafia crime wars. Follow the link in bio. . . @theimageapothecary #amreadingromance #bookstagram #booksofinstagram #bookreader #readersofig #readersofinstagram #readingislife #readingtime #reading #bookstagrammer #amreadinghistoricalromance #amreading #romance #historicalromance #kindle
So I did a thing today . . . Now for the fun part and celebrating since I'm over a month ahead of schedule! . . #contemporaryromance #historicalromance #writerofinstagram #writing #authorsofinstagram #authorlife #writerslife
I always used to laugh when I heard about authors writing a book a month. But now, when I'm facing the fact that I might actually make my goal of 75,000 words written in March, I'm not laughing. If I, a work-from-home, homeschooling mom can do it, I know you can! So do it! 2,500 words a day. You can! . . #authorsofinstagram #authorlife #writerofinstagram #writing #writerslife #youcandoit #goaldigger
So true! Love these fabulous words by @trentshelton They ring with so much truth. A few times over the last two years I faced situations that didn't pan out like I hoped. I knew there was a reason though, and sure enough months later, I found out what that reason was. He has a plan. You might not know what it is, but you have to have faith in whatever it is. . . #straightup #youareworthit #youareenough #youareworthy #morninginspiration #godisgood #godisgoodallthetime #livingyourbestlife #livingyourbestself
%d bloggers like this: