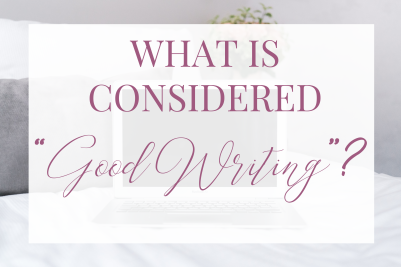 I have to say that in my opinion, I don’t really think there is an answer to such a question.

What is considered good writing?

See for me, I really don’t think there is an answer to that question. Why? Well, because not only are book subjective, but a writer’s voice is subjective, too. What some people love, others hate, and when you have that type of a situation, who is to say the author is a bad writer or a good writer?

No one. It’s all just a matter of personal preference.

At least that’s my opinion.

Recently, I saw an article about how Fifty Shades of Grey, Author E.L. James is planning on writing and publishing a writing guide for writers. A how-to book, if you will, about how one should write a novel, and it’s got some people scratching their heads and speaking out against it very publicly.

It’s no secret that her novels, well um, have been deemed, um, not very well written. Of course, she’s gone on record saying, “Well, 70 million people don’t agree with that statement.” I guess I can’t really say too much about that; however, I do know people who have read the books, enjoyed them, but still said they were poorly written. So really, just because someone bought the book doesn’t mean they didn’t think the writing was bad.

Of course, even with that said, it still doesn’t negate the fact that, once again, what some people love, others hate. Sure, she was slammed for bad writing, sure everyone I’ve talked to has echoed such fact, but sure, there are people who really don’t think the writing was bad at all. I know, I’ve met a couple of them.

So, the question on the table is this—should she, having the reputation she does, be writing and publishing a novel geared toward beginners on how to write a novel?

Why? Well, that’s my little secret. I’ve always taken the stance of zipping my lip when it comes to talking about someone else’s writing. I never want to be that author (*cough* Stephen King *cough*) to publicly rip apart another author. So with that, all I will say is this—the books just weren’t my taste.

So with this in mind, I, for one, won’t be purchasing her Writing Guide. Do I think she is qualified to write such a novel? My answer could go either way; however, bottom line is I don’t really care if she does or not. Because, her doing so, isn’t going to affect me at all.

So darling followers, what do you think of Mrs. James writing a how to write novel?